GRAND FORKS, ND– They needed all 60 minutes, but the University of North Dakota Fighting Hawks were able to sweep the University of Alaska-Anchorage this weekend, getting three unanswered goals in 1:24 to lift them to a 4-3 victory.

Adam Scheel got the call in net for North Dakota after Peter Thome played last night. However, Scheel got a bad break, after a pop-fly pass on front gave Nicolas Erb-Ekholm his second goal of the weekend, after the puck got deflected on a cross-ice pass and may have been batted down by Joel Janatuinen for the first goal of the game. While it was a slow start, the Fighting Hawks had their chances later in the frame, but Kristian Stead was able to keep the Seawolves ahead, stopping both Rhett Gardner and Janatuinen point-blank to preserve the lead.

“They came out pretty hard, I didn’t mind our start, but they had a better one,” mentioned captain Colton Poolman. “We kind of settled down (after the first goal). That’s maybe where we failed before. We looked at each other said this isn’t impossible. It was that collectiveness.”

“After winning Friday’s game, the first couple shifts– that wasn’t us and we were on our heels,” head coach Brad Berry stated after the game. “That’s one thing we’ll address and next time we get into the situation, we can adjust.”

Another bad bounce got Erb-Ekholm his second of the game, as he tried a cross-ice pass, but Cole Smith got a stick on it trying to deflect it and it went behind Scheel to make it 2-0 Anchorage. It took a while, but UND got a bounce of their own, after Stead made an amazing save at the side of the net, only to have a shot by Jacob Bernard-Docker go off his glove and in the net. Bernard-Docker registered his third goal of the season. Ninety seconds later and after a Jonny Tychonick penalty, Anchorage got the two-goal lead back after an Eric Sinclair was set up by Tom Hiekkavirta for a one-timer that went high-glove on Scheel.

While Anchorage kept the chances for UND to the outside, the Fighting Hawks broke through on the power play after Jordan Kawaguchi picked up a loose puck in the slot, dished it off to Matt Kiersted, who put away his third of the season past a sprawling Stead. Forty-three seconds later, UND scored on another power play, with Rhett Gardner tipping a Bernard-Docker shot to even the game. Forty-one seconds after that, Gardner got his second of the game, picking up a loose puck at the Seawolves blue line, driving to the net, and backhanding one passed Stead to pick up his seventh and eighth goals of the season in under a minute. 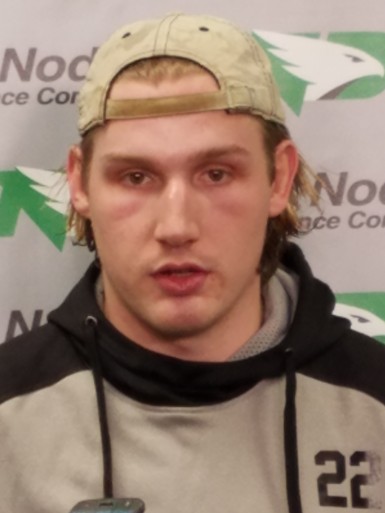 “I was excited,” mentioned Gardner about the game-winner. “Kind of a relief. A couple bad bounces on their first two goals. So to see a couple bounces go our way felt good.”

Anchorage’s best chance to come back was with Hiekkavirta ringing a slapper off the cross-bar with a minute remaining and Stead on the bench, but thanks to the likes of Mark Senden and Janatuinen selling out their bodies to block shots, UND gets the sweep with a 4-3 victory.

“Take a sigh of relief after that,” mentioned Poolman. “That wasn’t our prettiest hockey. They had a gameplan and stuck to it. We stuck through a lot of crappy bounces and we got to it and we pulled through.”

“When we were trying to catch a game last weekend, everyone went in a different direction,” said Berry. “There was care, but everybody wasn’t on the same page of the structure. This weekend, I thought there was patience to our play even though there was desperation, all five guys were on the same page.”

The Fighting Hawks will now travel to Duluth to get back into NCHC competition against the Bulldogs.