A couple of big moves since our last Maryland Developmental Update. Whether it be first call-ups or first goals, it’s been an eventful almost three months for the Maryland hockey prospects. We’ll start off first with the call-up:

Mike Chen, Knoxville Ice Bears/South Carolina Stingrays (Rockville): 6g, 19a, +6 (with Knoxville): A tremendous start to his career, Chen earned his first call-up to the ECHL on Monday. With 25 points in 40 games, Chen led all rookie defensemen in points, while also being third in points for Knoxville and second on the team in power play scoring with 11 points (3g, 8a) with the extra man.

Sam Anas, Iowa Wild (Potomac): 18g, 22a, 4 GWG: Talk about a boost in the last two months, Anas has been fantastic. After a ten-game points-streak and six-game goal-scoring streak in December, Anas has continued through to be one of the top contributors in Iowa’s line-up. With a playoff push coming up and a bigger role, expect Anas to really show up in a big way for Derek Lalonde’s bunch.

Nick Ellis, Bakersfield Condors (Millersville): 8-9-2, 3.23 GAA, .897 Sv%: Rookie woes have gotten to Ellis after a hot start. Though he got called up to Edmonton, he saw no playing time and was returned to Bakersfield, where Laurent Brossoit has gotten a hefty share of starts since. With Brossoit called up, Ellis could be seeing more playing time and hopefully get his first win since January 6th. 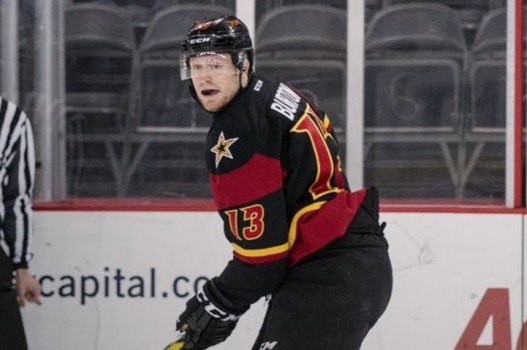 Jack Burton, Indy Fuel (Reisterstown): 2g, 6a, 47 PIMs: He may not light the lamp or burn up the scoresheet as often as he’d like, the responsibility of Burton in his own end may be a trademark going forward. At 6’3 and 210, Burton may need to be a little bulkier in order to be a lockdown defenseman, but that very well could come with time and seasoning.

Nick Sorkin, Wheeling Nailers (Rockville): 6g, 37a, +9: Sorkin has settled into the set-up role for Cody Wydo, Reid Gardiner, and Cam Brown. Not just on his team, but Sorkin’s 37 assists rank fifth in the ECHL. Sorkin also hit a personal milestone, getting his 100th professional point in his 107th game on February 12th.

Eric Sweetman, Idaho Steelheads (Woodbine): 4g, 14a, +13: Another defenseman who is finding his footing, Sweetman has gotten better as the season has gone along. Despite his 5’11 frame, Sweetman has come into his own with 12 of his 18 points (4g, 8a) coming in the 2018 calendar year.

Adam Varga, Mississauga Steelheads (Bel Air): 0g, 4a, -8: With some scratches to his name, Varga is really getting a taste of the OHL life at 16-years old. One bright spot is that Varga did get his first OHL goal on Monday, which was his second game back from over a month being out of the line-up. Here’s hoping the stretch run will help the Bel-Air prospect going into his draft year next year.

Patrick Giles, US National Development Program (Chevy Chase): 7g, 6a, +4: Though he was held without a point in the U17 Five Nations Cup, which the US did win, Giles did have a couple chances here and there during the tournament. A bit of a slide since starting off the new year with four points in four games (2g, 2a), the draft eligible Marylander still has plenty of time to up his stock before going off to Boston College.

-Heading into hosting the All-Star Game, the Utica Comets are amongst one of the hottest teams in the league with points in nine of their last 10 games (7-1-1-1) and four-straight wins. Even with leading scorer Reid Boucher (20g, 17a) on the shuttle from Utica to Vancouver, the Comets are still fighting in the playoff hunt. Thatcher Demko has continued to improve in the system with the Comets (16-7-5, 2.28 GAA, .929Sv%), but will need a lot of goal support to help. Despite Boucher’s 20, no other comment is in double-digits for goals. To keep their hot streak alive and hope to get a playoff berth, something will need to be done offensively to help Utica out.

-While things aren’t going great in Glendale, the Tucson Roadrunners are giving Coyotes’ fans some hope of what’s to come, mostly due to rookies Dylan Strome and Nick Merkley, who have commanded the offense for the Roadrunners in the first half of the season. While veterans Michael Bunting and Mike Sislo have helped out, the youth is being quite served– especially with Hunter Miska leading the team in wins (12-3-0), but his GAA (2.98) and save percentage (.898) leave much to be desired.

-One player that could be lost in the Florida Everblades season could be the second-half play, thus far, of rookie Joe Cox. The Michigan State product is on a seven-game point streak (3g, 10a) and has provided a much needed punch for the secondary scoring for the Everblades already dynamic offense. It just goes to show the time it takes players to develop, as Cox’s best season before this was in the USHL when he had 20 goals and 20 assists for the Muskegon Lumberjacks, while his junior year at MSU was his most productive with 11 goals and 23 points in 35 games. Around an All-Star line-up as he is, the protection could allow Cox to flourish throughout the rest of the season and into the playoffs.

-At the fourth spot in the Eastern Conference, the Wheeling Nailers have gotten a lot of their offensive from their first-year players. While Cody Wydo continues to be a constant, the emergence of Reid Gardner has been a welcome for the Nailers. Gardner leads the teams in goals with 21 and power-play goals with six. Couple that with another rookie in Cam Brown leading the team with 39 points (12g, 27a), the Nailers continue to churn out talent for the Penguins organization. The offensive will need to be strong, as the by-committee goaltending has a combined 3.14 GAA on the year.

-The race for the eighth-seed is still hot and heavy between a second-year Roanoke team who changed coaches to change fortune, the rebranded Fayetteville Marksman with one of the top players in the league in Jake Hauswirth on the team, while the expansion Birmingham Bulls are only three points out and have Mavric Parks being second in the league in minutes played and 7th in the league in save percentage (.911) despite a 3.32 GAA. When it comes to this playoff format, too, it should be interesting to see if the traditional 1st vs. 8th seed get picked because who knows how the top seed will look at these teams, who are already in playoff mode as it is.

-A big congratulation to Roy Sommer of the San Jose Barracuda for getting his 700th AHL career win this past weekend. Sommer has been a soldier for the San Jose Sharks organization since he came in as an assistant coach in 1996-97. He has coached San Jose’s AHL affiliate since 1998 from Kentucky to Cleveland to Worcester and now San Jose. For a guy who has never coached in the NHL, he should be considered for the Hockey Hall of Fame when he’s done, not only for the wins record in the AHL, but for being 3rd all-time for most games coached in the professional ranks, currently at 1,833– behind only Barry Trotz and Scotty Bowman.

-The hottest team in the Eastern Conference is the Syracuse Crunch. With a six-game winning streak, the Crunch have been able to get back into the North Division playoff picture. Though Cory Conacher is up with the Lightning, Michael Bournival and Matthew Peca have been able to pick up the slack. A balanced attack on offense has been able to help, as well, with 13 players potting at least three goals on the season. 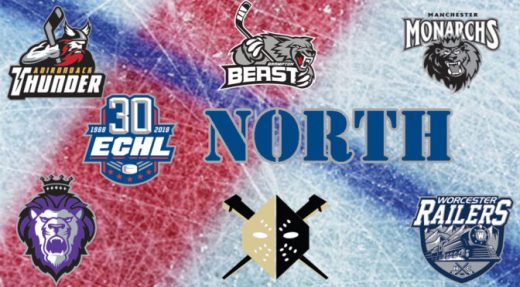 -The North Division could be one of the races to look at as the season goes along. All the teams are sitting at .500 or better to start the season, with only five points separating the fifth spot from the top spot. While the Manchester Monarchs are trying to get some distance with their four-game winning streak, Wheeling is right behind them with three of the top-ten in scoring on their roster (Cody Wydo, Reid Gardner, and Garrett Meurs). Reading, Adirondack, and Brampton are still contenders and who knows what Worcester could be doing as they keep going along.

-Though they are following Toledo in the standings, Cincinnati has a strong scoring presence, with both Shawn O’Donnell (10pts in seven games) and Justin Danforth (9pts in six games) with two of the longest point-scoring streaks in the league. With Eric Knodel helping out on the power play and Anthony Peters holding down the fort in net– the Cyclones are in a prime spot to battle Toledo for top-spot in the Central. 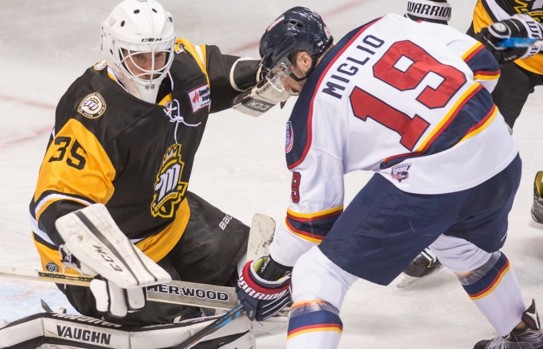 -One of the biggest stories is how the downfall of the affiliation in Norfolk of the ECHL plucked a lot of players from the SPHL. Max Cook (Fayetteville), Nick Miglio (Peoria), and John Rey (Birmingham). As the season goes on, depending on the fate of the Admirals, more names could be going that way. While it’s good for those players and the league to be a developmental asset, the teams may feel the crunch, especially if it’s late in the season and they lose a top guy when they need them the most.