In what could be the most complete Caps game in the series, the defending Stanley Cup champions put a six-spot on the Carolina Hurricanes to go ahead three-games to two in the series with a chance to close it out on Monday. Nicklas Backstrom’s hot hand continued with two goals, Alex Ovechkin had a goal and two assists, and Nic Dowd put up a penalty shot goal for the Caps.

It was the first game without TJ Oshie, who is out indefinitely with an upper-body injury. Devante Smith-Pelly, last year’s breakout playoff star, was called up and was the energy boost the Caps seemed to need for Game 5.

When you talked playoffs heroes in DC, there was always one name that came to mind. And he’s the #19 I picked in the Trail to Dale.

Up until last season, John Druce was a man of Capitals lore. The run that he had during the 1990 playoffs was one that every role player wants to have. While Alex Ovechkin was able to beat his goal total for a single playoff, the short time that John Druce was in Washington was one thing that most Capitals fans shouldn’t forget.

The former second-round draft pick but the Capitals in 1985, Druce plyed his craft in Peterborough of the OHL where he was a serviceable player, with his stats getting increasingly better over his tenure there. The same goes for his time in the AHL with the Binghamton Whalers and Baltimore Skipjacks, which included a 30-goal season with the Whalers. The consistency would continue onto the Caps, where he would split time between Landover and Baltimore. While he was very unassuming in the 1989-90 season, something went very right in the 1990 playoffs, where he was able to create a lot of much for the Caps.

While the first round was the Dino Ciccarelli show, Druce was able to muster three goals in the six-game series. However, Ciccarelli would be injured in the second round against the Rangers, which allowed John Druce to take over offensively. In the five game series, Druce had nine goals and two assists, including a hat-trick in Game Two and OT series-winner in Game Five. Druce would only put up two more goals and one more assist of that playoffs, as the Caps were outplayed by the Boston Bruins in the Conference Finals.

Druce came back to the Caps for the 1990-91 season and would register his only 20-goal and 50-point season of his career. He couldn’t recreate the same magic in the 1991 playoffs, only putting up a goal and assist in 11 games for the Caps, while in the 1991-92 season, Druce had 19 goals and 18 assist, but only one goal in the playoffs. Druce got moved to Winnipeg in the summer of 1992 and then had stops in Los Angeles and Philadelphia before hanging up the skates.

After playing, Druce spent five years doing junior hockey commentary for Rogers Sportsnet before going into financial advising and then co-founding Unique Vehicle Wraps, a company for advertising on cars, trucks, and buses. While some people may forget his playing career overall, I don’t think many will forget his goal-scoring abilities in the 1990 playoffs for the Caps. 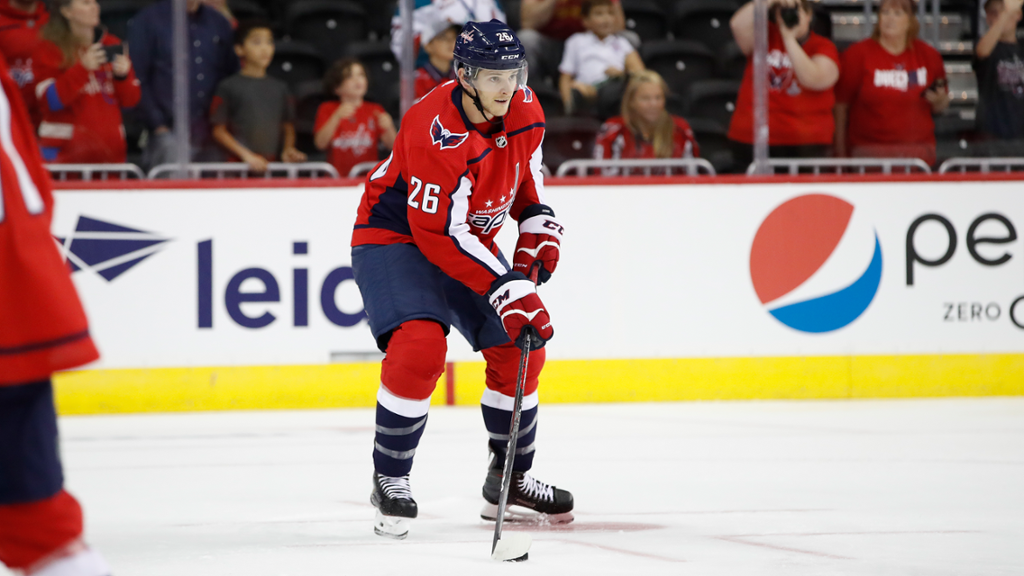 Yes, it’s a small sample size of three games, but the Caps have once again been able to pluck someone off a scrap-heap, clean them up, and make them into a potentially lethal role player into their line-up. First, it was Brett Connolly, then it was Devante Smith-Pelly, and now…it very well could be Nic Dowd for the 2018-19 season.

With the loss of Jay Beagle to free agency, the Caps were in need of a role player at center to help with the defensive side of things, as well as a penalty kill and all the other things that people who love intangibles and heart crave. Dowd, who played in both LA and Vancouver last year, has shown that he deserved that last roster spot, which is something that you can bet he’ll still be able to have once Travis Boyd comes back from injury.

The St. Cloud State product, who was picked in the 7th round, has fit into Todd Reirden’s system very well to start off with. Coming onto a team who is coming off a Stanley Cup victory means that the expectation to repeat is quite high, as well as the ability to not fall into a bit of a hangover after winning the franchise’s first title.

“Dowder’s a great guy, I’ve skated with him before,” recalls TJ Oshie after the Caps first game October 3rd, “I think he’s a guy who will appreciate what we did and I think he already feels welcomed. He respects with what we did. It was maybe a little awkward (to watch/take part in the banner raising ceremony), but I think he knows he’s part of this chemistry now.”

After scoring in his first game with the new team, goalie Braden Holtby acknowledged what a big deal it was for everyone saying,”I think that goal was big for him and it was great to see for us. He’s a phenomenal teammate and fits right in the mold of who we want here.”

While he won’t be the flashiest of players for the Caps, he’s going to be a guy who will do the small things that people will love and become the newest of folk-heroes for the local fanbase and people who enjoy a story like Dowd who comes from Huntsville, Alabama and rose through the ranks of the NAHL, USHL, NCAA, AHL, and now looks like he might have a full-time gig in the NHL. While it’s not a story like Connolly, who was a first round pick and didn’t go anywhere with his team; nor is it like Smith-Pelly who was written off by many teams prior to finding his spot– but his scrappy attitude to stay not only in the line-up, but up in the NHL– will endear him to many Caps fans.

That said, much praise should go to Brian MacLellan, Ross Mahoney, and the scouting staff for not only taking a chance on numerous players, but making sure they’re in a position to succeed in the process. They may be giving them barely-above league-minimum contracts, but at the same time– they’re using their money and roster spots very smartly to have a successful team as a while.