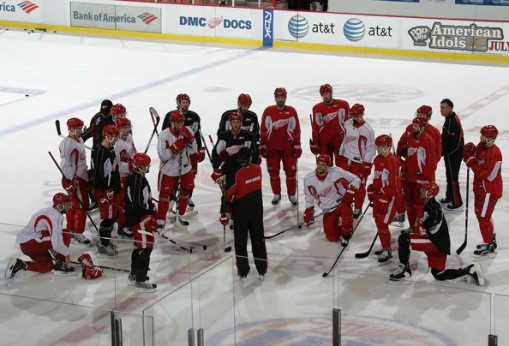 While reading around this week, I saw something that the wonderful and talented Brad Elliott Schlossman of the Grand Forks Herald put out regarding this year in NCAA men’s hockey. There’s a new rule in place which allows teams to dress an extra skater for games this season. Rather than the traditional 18 skater set-up, they’ll have one more skater for whatever they want.

Obviously, this will help if someone is a little banged up and may not make it the whole game, but it also provides some interest techniques that some teams will be able to utilize. In thinking of that, you have to wonder how close an eye the NHL will have on this situation. While they usually guinea pig the AHL for ideas to change the game, the NCAA could be the ones to show the NHL the way on roster spots.

Just imagine being able to suit up an older Alex Ovechkin and use him just for power play chances. No wasted energy, not an increased chance of getting hurt– just Ovi out there on his spot, setting up for a one-timer with the extra man. Think how long Yanic Perreault’s career could have been if he was just there to take crucial face-offs and then get off the ice. It would make the tactics a little bit more interesting for coaches because they may not have to choose between two guys when they can put them both in the line-up and not risk much of anything.

Granted, you could use that power for evil and the idea of the goon (not the old WWF gimmick) coming back because he’s not really taking a roster spot from someone and have him just out there to whale on someone. They really serve no purpose for the 19th skater, but it’s an intimidation factor that you know some coaches would use just to send a message– probably something the NHL doesn’t want to have happen.

That all being said, it would be a nice little insurance policy for a player who may be close to coming back from injury, but not all the way ready– this spot would allow them to ease back into the playing shape they may want to be in, while allowing for a full roster in case they’re not 100% ready.

Sure, for colleges it’s a way to get all some of their incoming freshman a chance to play and not be healthy scratches while also not completely destroying the chemistry of the lines already made up; but you can reason to believe that the NHLPA– should this process work out– will pitch this to the league in order to get more of their members suited up on a gameday roster.

It might be a little far-fetched, but with the NHL– it’s just crazy enough to work.