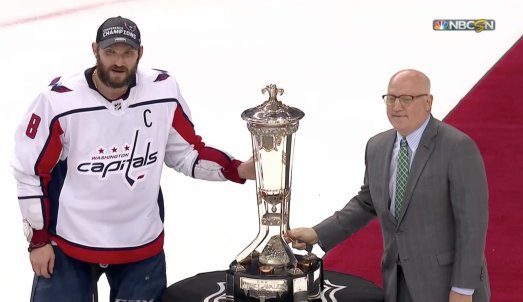 After Alex Ovechkin scored 1:02 into the game, the Tampa Bay Lightning tried like hell to even up the game and take the lead. However, with the Caps setting up a wall in front of Braden Holtby and two Andre Burakovsky goals– the Washington Capitals will go back to the Stanley Cup Final for the first time since 1998. Holtby had back-to-back shutouts and Nicklas Backstrom had the empty net goal to finish it.

The Caps have beaten the Penguins, won a big Game 7, won the Eastern Conference, and now will try to slay another demon in beating Marc-Andre Fleury and George McPhee of the Vegas Golden Knights. Those games start Monday.

Before Alex Ovechkin, the Caps’ biggest superstar offensively was Peter Bondra. While he may not have had the national appeal that Ovechkin has, he was a big part of the Capitals offense in the mid-to-late-90s with nine of his 14 seasons being 30-plus goal seasons, including two 50-goal seasons in 1995-96 and 1997-98. Bondra was the new wave of goal-scorer with the exits of Mike Gartner, Dino Ciccarelli,Geoff Courtnall, and really made the team his own.

Once over from what is now Slovakia, Bondra formed a kinship with Michal Pivonka, who helped Bondra and his family get accustom to life in the US and the NHL. While Bondra would also use Dmitri Khristich as a resource, Pivonka and Bondra seemed to be the bosom buddies. With the same agent, both Bondra and Pivonka held out for a period before the 1995-96 season, where they would play in the IHL with the Detroit Vipers. Both would come back and had his top goal scoring season with 52 goals in only 67 games.

As the Caps were sinking, the team felt they owed Bondra the chance to go for a Cup, to which they traded him to Ottawa for Brooks Laich. A chapter of the Caps had closed, but due to that trade and others during the end of 2004, it paved the way for Alex Ovechkin to take the reigns and be the new face of the franchise. Luckily, Bondra is still in this organization, serving as a community ambassador and should be the next in line to get his number retired.